BUCK: While we’re all sitting here worrying about the lockdowns, the masks, or the possibility of lockdowns and all the rest of it, the DOJ, courtesy of Attorney General Merrick Garland, has put out a warning to states out there — I find this fascinating — that they shouldn’t just assume — this is basically what Garland, as the attorney general, is saying — that they can go back to whatever their voting rules were, before the emergency situation of covid in 2020, that they’ll still challenge things.

So you can’t just revert back and assume that the DOJ is going to be okay with that, that the new, under-an-emergency rules shouldn’t be thought of as really just for emergency. Now the Democrats got a taste of mail-in balloting in places that had never had it before.

Now that they have experienced the obvious benefits for making it much harder to prove fraud, much harder to avoid fraud for an election, Clay, the DOJ is going to bring all these lawsuits. This is all part of the Biden administration narrative, that if you believe in voter ID, if you believe in mail-in balloting or ballot harvesting is a problem, Jim Crow 2.0. This is the DOJ doing Biden’s dirty work, which we all should have expected.

CLAY: Thankfully, we have a big decision that came out of the Supreme Court in the couple of months, the 6-3 decision, which gave great deference to individual states as it pertains to election law. So it is going to be nearly impossible, for the Department of Justice to win these lawsuits — and I want to give credit for the state of Georgia, which has already had its new law challenged for the Department of Justice.

Because I believe in the state of Georgia’s response to that lawsuit, they asked why the Department of Justice was not filing suit in places like New York, Delaware, Democratic states which have more restrictive voting policies that what exist in Georgia right now. And that is an impressive, I think, counterpunch.

But also, the law ultimately is going to be on the side of these Republican states that are trying to strengthen the overall voting integrity of their elections. But in the meantime, it can be a political card that’s being played.

CLAY: Unfortunately, it’s just bound to fail, and I think the Department of Justice lawyers would know that, which is why these lawsuits being filed in any way are inherently a directly politically move.

BUCK: Right. This is about the narrative that the media will run with, of Republicans suppressing minority votes, Republicans preventing non-white voters from being able to cast their ballots. And that the DOJ is bringing the suits, essentially is used as data points one, two, and three —

BUCK; — about how awful the Republicans are. Now, you’re taking it from the perspective of, look at what the actual legal outcome will be. In the meantime, it has to make its way through the court. The DOJ is putting out these memos, and the talking points going into, what will be quite a midterm election will be that the Department of Justice has brought suit against the Jim Crow 2.0 laws of the GOP in Georgia. 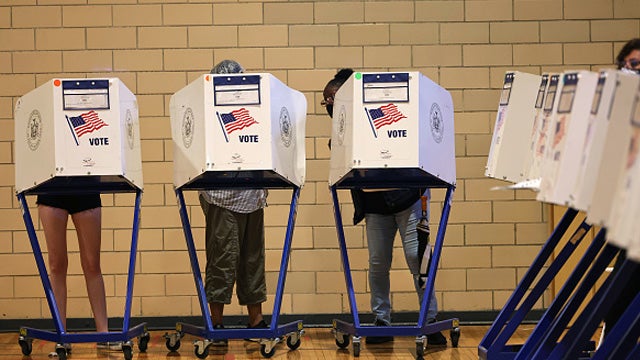 This is classic usage of the powers of the DOJ for a very partisan electoral agenda, and it won’t work in the sense that they’ll get everything they want. But it does provide ammunition to their side to continue on with this story line that anything Republicans do to try to make voting more secure — and, by the way, in baseball, it’s a brushback pitch. Right?

BUCK: They’ve thrown a few of those with these guidance documents about states doing audits. The DOJ is saying, “Nice audits you got there. Be a shame if something happened to it. We might have to come in there and look at it in addition.” It’s very transparent what they’re doing. They got a taste. The Democrats got a taste of changing the rules in 2020 on the emergency basis, and now they’re saying, “How dare do you think that was actually on the emergency basis?”

CLAY: I think it also reflects how little power Merrick Garland has in the Department of Justice. He’s an old white guy, and any time the revolutionaries — younger, probably more diverse underlings that are working in the Department of Justice — bring this in front of him, he’s afraid that he’s going to end up on the chopping block. “Oh, what do you know about voter fraud, old white guy?”

Merrick Garland is basically just like Joe Biden. They are doing the bidding of others. I legitimately question if Merrick Garland was looking at all this evidence that he would bring these lawsuits at all if he were his own client, if he were using his own legal acumen to make decisions about which cases to bring. When you know you’re bringing a lawsuit that is bound to lose, it’s really a show-and-sham lawsuit, and he has to know that and he has to recognize it.

It’s evidence of how ridiculous the Jim Crow 2.0 narrative is in general.

This story originally appeared in Clay Travis and Buck Sexton

About The Clay Travis and Buck Sexton Show