CALLER: Yes, Rush. Mega dittos, mega prayers. I'm basically a lifer. My father turned me on to you in 1988. I'm a first-time caller.

CALLER: Yes. I always say, my father introduced me to the two best things in life, you --

RUSH: Uh-oh. Are we losing the connection?

CALLER: Oh. Can you hear me?

RUSH: Well, last I heard you say, two best things in life, you and...

CALLER: Okay. Well, I was saying God-d, the way you say God.

CALLER: Absolutely. Absolutely. Okay, Rush, I'll get right to the point here. You talk about the white Millennials, the white, you know, these gals stirring up the trouble. And I think in my heart of hearts they are not nurturers. We've beaten nurturing out of our young women. Nurturing is a dirty word, and it's our society in general, it's the school system, whatever form it takes, it's a dirty word. It's not looked upon. And these women --

CALLER: Exactly. And you want to know something? These girls get out of school, out of college, and I've talked to some of them. "Oh, I want to make a difference. I want to change the world," that kind of stuff. But the last thing on their mind is a marriage, children, raising a family, creating a home. These are just things that like --

RUSH: Well, I'll tell you why. It says up here that you wanted to know what's going on with these women. They have been affected by so much. They've been affected by modern era feminism, which can be traced back to, well, the origins. I first became aware of it -- I was first confronted by it in 1968. I was 17 years old, and I was working on the radio every afternoon after school. And because of FCC regulations at the time, you had to do certain things on the air in the community to maintain your broadcast license with the federal government.

So that meant a lot of community service programming, a bunch of dull, boring stuff that you put on the air at 7 a.m. on Sunday when everybody's in bed or on the way to church. You don't put it on when anybody's gonna actually hear it because nobody's gonna want to listen to it. And I had to host those discussions. 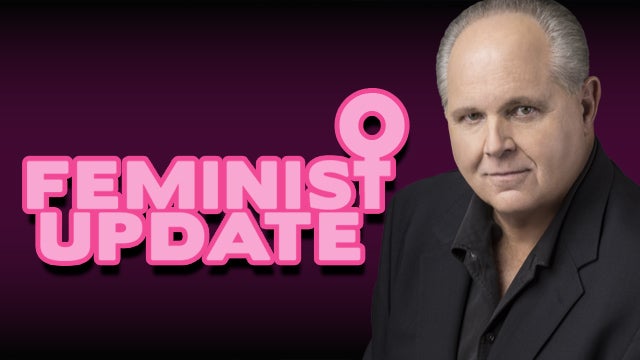 And I'll never forget, women from my high school were arranged as guests, and they came on, and they were mad. Not at me specifically, but mad at me generically on behalf of what was then called women's liberation.

And I'm listening to this, in my world, the way I looked at the world when I was 17, women called the shots, women ran the world. I think they still do. I think the power has always resided with women in a civilized society. I want you to listen to me. Please don't have a knee-jerk reaction here 'cause I'm not trying to cause one, and I'm not trying to be funny. In a civilized society -- and I realize not all of our society is. I mean, we've got rapists and muggers, we got genuinely bad people out there. But in the civilized elements of our society, women have the ultimate power because they have the power to say "no" or "yes."

And then, of course, it just totally lost control when these feminist professors got hold of the curriculum on various college campuses, that was the end of it. And these women had been indoctrinated with a bunch of genuine hate for America, hate for men who are their natural oppresses. We had law professors -- oops...

RUSH: I'll never forget in the 1990s, a professor of law at the University Michigan, Ann Arbor, Catharine MacKinnon. She was a highly reputed law -- this woman was not a fringe figure. This woman was considered mainstream. She taught the women in her classes that all sex was rape, especially the sex in marriage. All sex is rape, that men are incapable of not raping.

Now, if you're a young, impressionable woman and you're feeling your oats and you think you're on the cutting edge, and you're being given brand-new curriculum stuff that's earth-shattering and then blowing up all the old conventional wisdom, you're gonna glom onto that, and they did. And they were turned into raging, angry young women. And they still to this day haven't gotten over it, a lot of them haven't.

I don't want to recount here the entire feminist movement. I could. I could start right now and not repeat myself in the next 90 minutes, in recounting the various stages of all of this. But specifically the question was from the caller, what is happening to these young Millennial, white Millennial college graduate women, why are they so into Black Lives Matter? Folks, I can't describe for you the guilt trip that they have ladled on them. And it just intensified once they got to higher education.

They've just been infuriated. They've been enraged. And they think they're the only ones who get it. And it couldn't have happened if there hadn't been the baseline foundation of feminism for the past 30 years, 25 years on which all of this current white supremacy and all these other horrible things are built on, the foundation of feminism that they have been subjected to as part of their college education.

And it's not just one campus. It's throughout the entire upper tier, including the Ivy League. And it was very seductive. Women my age glommed onto this stuff. You know, I'm in my early twenties, and it was a confusing time for everybody. Men didn't know how to act. Women didn't know how to act. So everybody's acting the way they thought they had to act just to get along. So nobody was being real. Some of that has maintained itself.

But the politicization and the corruption of virtually everything in the American cultural structure, the way we get along with each other, that's been corrupted, that's been politicized. And it has led to them believing that people like Donald Trump are the scourge of the earth, that masculinity is toxic, that confidence and self-assuredness is unreal, that it's dangerous.

Anyway, I could go on. Let me grab another call. Lubbock, Texas. Amy, glad you waited. You're up next, and it's great to have you here. Hello.

CALLER: Hi, Rush. Thank you so much. Mega prayers, love, and respect to you. I, like your caller just before, started listening to you around 1988 with my dad. My strong, manly dad. And I come to you with a little bit of a flip side of raising young men. I have a 15, 18, and 20-year-old. And their generation has battled it since birth, the de-masculinization. And I believe truly that feminism is one of the most destructive things to our relationships and that our young men, men in general, raising them, I want them to know it's God's design.

Be confident, be strong, you're protectors, you're leaders, and that's okay. And women like that. And that's okay. I remember about a year ago, maybe, or so you read a statistic that struck me about Millennial women marrying older men. And for me it was a light bulb like, of course. Because they're looking for masculine men. They don't have that in their generation because it's been stripped.

CALLER: Right. And my husband and I have just really tried desperately to instill in our kids, our boys that that's not right. That's not God's design. Like, you are to be confident and strong and leaders and protectors, and that that is really okay, and that women, women that will matter in life, will gravitate to that.

They are to be impugned. They are to be driven out of our society. Masculine, confident men with assuredness of their own existence and men who like themselves are to be deemphasized and so forth. It's a hideous thing. Look. It is one of the main reasons why Trump is so despised by the people we're talking about here. Thanks for the call, Amy.